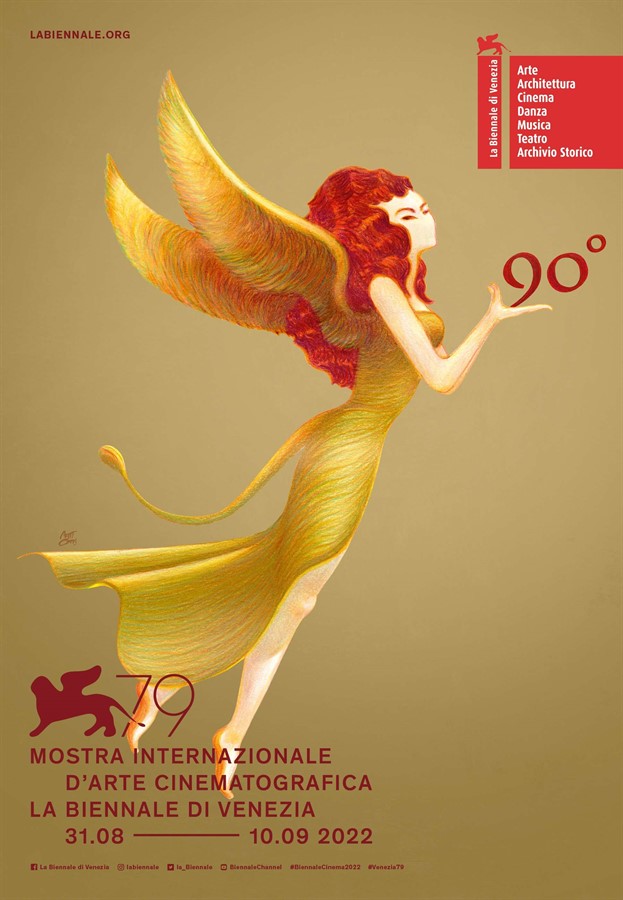 Italian illustrator and artist Lorenzo Mattotti is, for the fifth consecutive year, the author of the image for the official poster, and for the fourth year, of the opening sequence for the Venice International Film Festival of La Biennale di Venezia.

The image chosen for the poster this year depicts “a Lioness gliding through the air offering us this anniversary ¬– the 90th, explains Lorenzo Mattotti. It has been 90 years since the first Venice Film Festival and for this reason we wanted the image to be classical in style, just as the choice of a gold background was equally classical. The colour gold is also a reference to the posters of the early decades of the twentieth century. The Venice Film Festival has always been classical, but provocative as well. Here the Lion, symbol of power and strength, has been transformed into a Lioness who embodies elegance and creativity. After 90 years, the Lion of Venice, symbol of the Film Festival, has become a Lioness who flies through history with grace and energy, as a symbol of hope, a rejection of aggression and ferocity”.


Lorenzo Mattotti lives and works in Paris. He began his career in the late 1970s as a comic artist and in the early 1980s founded the Valvoline group with other illustrators. In 1984 he created "Fuochi", which was greeted as an event in the world of comic art, and won important international awards. In cinema, he collaborated in 2004 on Eros by Wong Kar-Wai, Soderbergh and Antonioni, and was responsible for the presentation segments of each episode. He was a creative consultant for Pinocchio by Enzo D'Alò. In "Incidenti", "Signor Spartaco", "Doctor Nefasto" "L'uomo alla finestra" and many more books, all the way to "Stigmate" published in Italy by Einaudi, Mattotti's work has evolved following an extremely coherent constant. Today his books are translated around the world. He publishes in newspapers and magazines such as The New Yorker, Le Monde, Das Magazin, Suddeutsche Zeitung, Nouvel Observateur, Corriere della Sera and Repubblica. He has illustrated many books for children including "Pinocchio" and "Eugenio", which won the Grand Prix in Bratislava in 1993. He has held many solo exhibitions including an anthological exhibition at the Palazzo delle Esposizioni in Rome, at the FransHals museum in Haarlem and at the Musei di Porta Romana. He creates posters, covers, advertising campaigns and is the author of the Cannes 2000 poster and the posters for the Estate Romana festival.
In May 2019, he presented to great acclaim in the Un certain regard section of the Cannes Film Festival, his first animated feature-length film as author and director, titled La famosa invasione degli orsi in Sicilia (The Bears' Famous Invasion of Sicily) inspired by the fable/apologue by Dino Buzzati.