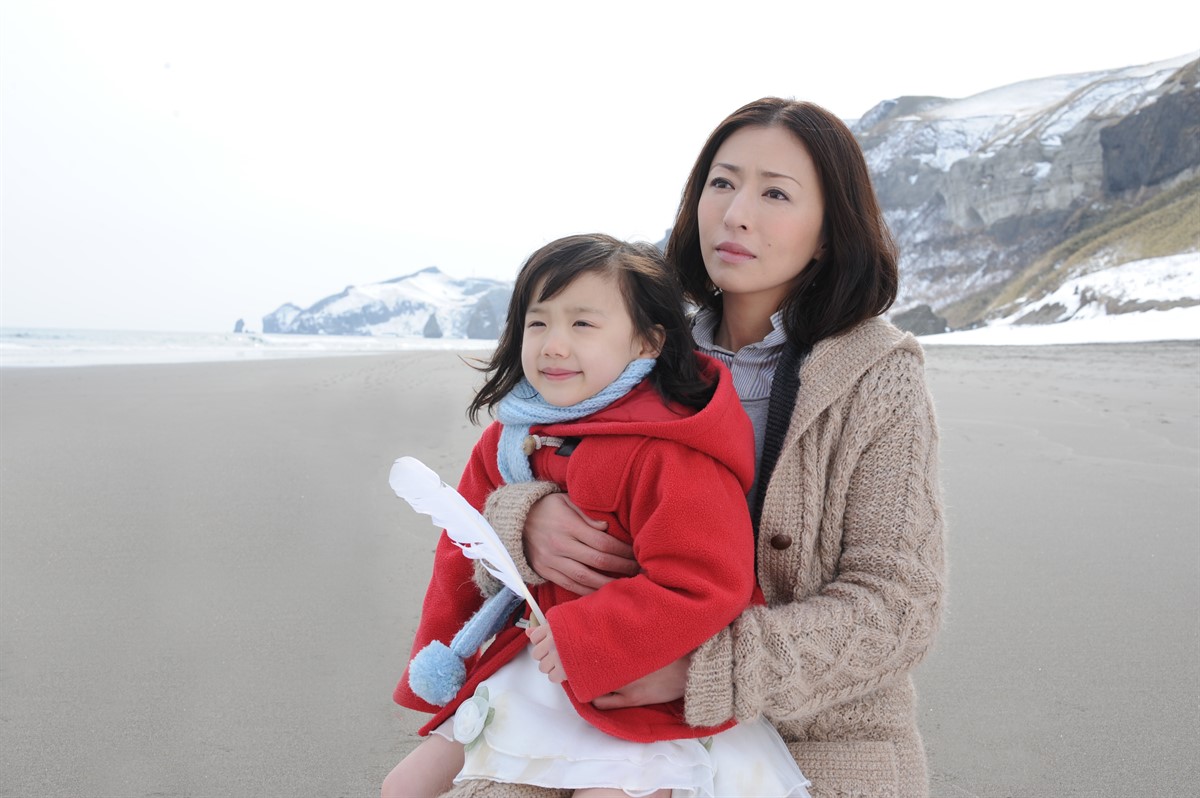 The Turkish TV series landscape is very wide and recently many Japanese series have been successfully adapted with local actors.
Among the huge success of this practice there are many factors including the same values linked to family drama, romantic love, social topics like child abandon and solitude. Beside the cultural distances there are some links like respect for the tradition and for the family.

Some of the biggest hit were remade in Turkey, starting from drama series of Nippon TV called Anne (Mother) produced by Medyapım and MF Yapım and distributed by Global Agency. It is the adaptation of a Japanese drama series "Mother". It focuses on a story of a woman who responds to an abused girl's silent cries of help. Zeynep helps 7-year-old Melek escape suffering at home which echoes her own painful childhood, and seeks to create the mother-daughter relationship she always longed for when they flee to Istanbul. It was broadcasted on Star TV with 33 episodes with very good ratings. Also, the Turkish version, "Anne" (Mother), has been distributed to almost 50 countries around the world.

Secondly, drama Series of Nippon TV Kadın (Woman) produced by Medyapım and MF Yapım and distributed by Calinos Entertainment, remade in Turkey with very successful adaptation. It focuses on the survival story of Bahar, a young widow with two children. After some years of happiness, Bahar loses her husband and she is left with only two things that makes her hold on to life: her children, Nisan and Doruk. Together, she is able to turn life into a game, poverty into fun and absence into joy. She believes that when one has a smile on their face, the heart also responds with a smile. It premiered on FOX TV Turkey on October 24, 2017 and by the first episode it got very good results. It was broadcasted 81 episodes and made a final.

Drama Series of Fuji Creative Cooperation Kansai TV, adapted in Turkey, called Tehlikeli Karım (My Dangeorus Wife). It was produced by Mf Yapım and broadcasted on Show TV with 6 episodes. Restaurant owner Alper plots to kill his wealthy wife but is thwarted by a mysterious kidnapping, leaving him to a hatch another plan to grab the ransom cash and flee with his lover. After six years of happy marriage, Alper and Derin's relationship is torn apart when Alper cheats on his wife. While he is an unsuccessful son from an ordinary family, she is very wealthy. Utterly dependent on her, he uses her family inheritance to finance his restaurant. The trouble starts here...

Japanese series of Fuji TV, Aşk Ağlatır (Love That Makes You Cry) produced by Mf Yapım and distributor by Madd Entertainment, adapted in Turkey. In the story, Ada was just a little girl when her mother died and her mean uncle agreed to take her in. Now she's a 19 year-old young woman living in a remote village who has spent her whole life serving her uncle and invalid aunt. Even the wages from her day job go to support her uncle's greed. Just when you think things can't get any worse , they do. First, she loses her purse, which contains the letter her mother wrote to Ada right before she died. Then her uncle sells her to a petty gangster who wants to make Ada his wife. It was broadcasted on Show TV with 16 episodes.

Drama Series of Fuji TV Bir Litre Gözyaşı (One Litre of Tears) remade in Turkey as well. It was produced by Medyapım and MF Yapım and also distributed by Madd Entertainment. It is the story of 18 year-old Cihan. She is a happy, healthy freshman at university when strange things begin to happen. There are changes in the way she walks, and then she starts to fall down a lot. Eventually she is diagnosed with an incurable brain disease. Her cerebellum will gradually deteriorate until she will no longer be able to walk, speak, write or eat by herself.

Remake of Nippon TV's Japanese series called Öğretmen" (The Teacher) produced by Medyapım and Mf Yapım and distributed by Madd Entertainment was broadcasted on FOX TV Turkey. Unassuming physics teacher Akif's homeroom is even more unruly than usual when he suddenly announces, "from now on you are my hostages." With Akif's touch of a button, a violent explosion separates their classroom from the rest of the school. Akif informs his students that there are many more bombs stashed throughout the school, and, now that he has their attention, he intends to give them one final "lesson in humanity". The teacher will keep his class hostage until they face the truth behind the death of their classmate Rüya, a popular student-athlete who seemed to have it all until everything came crashing down following multiple scandals. This rapid rise and fall ended with the young girl's death.

The Turkish version of Nippon TV's hit series Abandoned broadcasted with 11 episodes on FOX TV Turkey with the Turkish name "Çocukluk". The adaptation produced by Medyapım and Mf Yapım and distributed by Madd Entertainment. The Ali Kaan Children's Home is an orphanage run by the gruff but well-meaning Mahir. Mavi came to the orphanage when she was just two years old. Mahir did his best to find a home for her; however, at this point she belongs to Mahir and that place. Mavi draws strength from Mahir and the other children look up to her, because she is brave, and because she knows that when they hold on to each other they will never be lonely. Many children come through the orphanage, and Mavi believes it's her duty to protect them all, including her three best friends: Mozi, the naïve piano prodigy; "Sparrow," who was brought to the orphanage under dangerous circumstances, and Bambi, who lives in a dream world. Together they and the other orphans will figure out that life can be hard, but it doesn't have to be impossible, so long as you stand by your friends.

Turkish companies are eager to find new projects for local adaptation and Japan is not the only country and there are many upcoming projects in development.

A smash-hit scripted comedy where mismatched pairs pour out their hearts in Couples Therapy will be on Exxen with Turkish adaptation "Sizi Dinliyorum". It will be produced by 25 Film for Exxen.

Well-known popular Italian series "Love Snack" is going to be adapted for Exxen. The Turkish adaptation named "Sadece Arkadaşız" is in the production process and will be on Exxen soon.

Zengin Kız (Rich Girl) will produce by Medyapım for FOX TV Turkey. The script is written by well-known scriptwriter "Deniz Akçay", and starring by "Alina Boz". In the story a babysitter named "Zeynep", who has a useless father who is a horse racing enthusiast, aspires to a rich life instead of a poor life that she is constantly crushed by, receives a large amount of money on her birthday, and prepares for a big exam with this money. The series will highlight the stark distinction between the rich and the poor.

Turkish Adaptation of  The Cleaning Lady is planning to adapt in Turkey as named "Benim Adım Farah" by O3 Medya Production House. The channel hasn't been announced yet, but it would be on FOX TV Turkey. The lead actor is "Aslı Enver (known by "Evermore" series). The story is a thrilling and emotionally-driven character drama about a whip-smart doctor who travels overseas for a medical treatment to save her ailing son. However, when the system fails and pushes her into hiding.

Avcı (Hunter) will be produced by BKM Productions for Disney+, the scriptwriter is "Hakan Bonomo" and the lead actors "Pınar Deniz" and "Uraz Kaygılaroğlu. It is the story of Yasemin, who acts as an actress during the day and turns into a serial killer at night...

Yalıçapkını (A.k.a "Antepli") started to the production process. The series will be produced by OGM Pictures for Star TV. The lead actors are "Afra Saraçoğlu" and "Mert Ramazan Demir". In the story, Ferit, the son of a wealthy family, is famous for his debauchery. His grandfather Halis Ağa took a decision when the police raided his house and decided to take the daughter of a family they are close to from his hometown Gaziantep as a bride for his grandson.

Based on a book story written by Dr. Gülseren Budayıcıoğlu will be produced as named "Kral Kaybederse" by OGM Pictures for Star TV. The series tells how a hunter who thinks that he will not go down from the peaks falls prey to his prey, and how an unhappy woman who has convinced herself that she will not be loved becomes a hunter in her tragic life. The lead actor is "Kıvanç Tatlıtuğ (known by "Forbidden Love").

Kusursuz Kiracı will be produced by Mf Yapım for FOX TV Turkey. The series will tell the impressive stories of people living in an apartment complex. The lead actors are "Dilan Çiçek Deniz" and "Serkay Tütüncü". It will be on air soon.