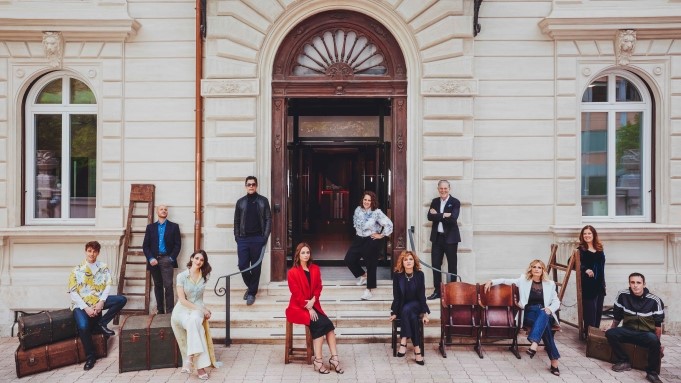 Netflix has opened an office in Italy and unveiled a huge slate of scripted and unscripted series and films from many of the country’s biggest producers, with Co-CEO Reed Hastings detailing the streamer’s roots in the nation.

Located in the heart of Rome, the office will house around 70 staff and adds to Netflix’s suite of European bases, which already includes the UK, France, Spain and, most recently, Poland, among others. Netflix said the new base cements a “long-term commitment” to Italy and its creative community.

“The dream of Netflix is to support creativity around the world,” said Hastings, who was speaking to a group of around 100 journalists and execs along with dozens more watching virtually on livestream.

“We’re expanding our premium films and incredible series here and we want to do all kinds of new content, not only from established producers but allowing new voices to share what is really unique about Netflix. These are stories that are Made in Italy and watched by the world.”

The series slate includes a drama based on Il Gattopardo (The Leopard), a drama from Indiana Pictures and the UK’s Moonage Pictures, with British director Tom Shankland attached; Cattleya-produced thriller Inganno (working title); a currently untitled animated series from cartoonist Zerocalcare; Lotto Gang (working title), from BIM Produzione and Feltrinelli Originals and loosely based on the biggest scam in Italian history; and I Hate Christmas, a comedy from Lux Vide.

Speaking prior to Hastings, Netflix Italy’s Andreatta said her strategy is to tell stories “outside of Italian stereotypes.”

“This strategy puts telling stories about Italy right at the center,” she added. “We want stories that can be surprising, provocative and entertaining. Even when on a beaten track, they bring a fresh look.”

On the non-scripted front, Netflix has ordered Wanna, a crime docu-series from Fremantle Italy; Running For the Truth: Alex Schwazer from Indigo Film; and Summer Job from Banijay Italia, which is billed as the streamer’s first original reality format.

New films comprise Robbing Mussolini, a heist caper from Bibi Film; Cosimo Gomez’s My Name is Vendetta, an action flick from Colorado Film; GT Film’s Love & Gelato, written and directed by Brandon Camp; Under the Amalfi Sun, a follow up to Under the Riccione Sun from Lucky Red; and Jumping From High Places, based on a novel of the same name and produced by Lotus Film.

Netflix already has several Italian series in production, including Lidia Poet, Brigands, The Lying Life of Adults, Tutto Chiede Salvezza (first images of which were shared at today’s event), the second season of Framed! A Sicilian Murder Mystery, the fifth season of SKAM Italia and Di4ries.

Netflix Italian slate in full
TV Series:
A series inspired by the novel Il Gattopardo (The Leopard)
Producers: Indiana Production and Moonage Pictures
Inspired by the novel by Tomasi from Lampedusa, which became the cinematic masterpiece of the same name by Visconti. Director Tom Shankland will bring a modern perspective to the story of Prince of Salina and his family, going deeper into characters and stories from the book.

Inganno (working title)
Producer: Cattleya
A sentimental thriller that plays with suspense, taboos, and uncomfortable truths about love. The series follows the passionate and turbulent relationship of an older woman and a young man who is half her age. Their relationship undermines social and family norms of the Mediterranean culture.

New animated series by Zerocalcare
Producers: Movimenti Production and Bao Publishing
From the creators of Tear Along The Dotted Line comes a new untitled series. The narrative world, unique language, and the unmistakable characters of the universe of the great Roman cartoonist return in a new format, with six half hour episodes that will go even deeper into the themes dear to the author.

Lotto Gang (working title)
Producers: BIM Produzione and Feltrinelli Originals
Loosely based on the true story of the biggest lottery scam in Italian history, Lotto Gang follows a group of unforgettable antiheroes on a heist in the outskirts of Milan in the mid-90s. An incredible story that combines action and Italian comedy.

Wanna
Producer: Fremantle Italy
A crime docu-series, filled with pop culture references, that explores the known and unknown elements of Wanna Marchi and a historical moment in the history of Italian TV.

Running for the Truth: Alex Schwazer
Producer: Indigo Film
An unfiltered look at the rise, fall and search for redemption of a sportsman, against the backdrop of an intricate sporting and judicial affair.

Summer Job
Producer: Banijay Italia
The first Italian Netflix original reality show. What begins as a heavenly vacation soon turns into the first work experience for ten young men and women who have never held a job. Presenting, for the first time as a host, Matilde Gioli.

My Name is Vendetta
Producer: Colorado Film
A fast-paced action, survival and revenge film set in Northern Italy. Written and directed by Cosimo Gomez and starring Alessandro Gassman as the protagonist.

Love & Gelato
Producer: HT Film
The adventures, misadventures of Lina, a young American in
search of herself, her roots in a glittering Rome, and of course a lot of gelato. Written and directed by Brandon Camp.

Under the Amalfi Sun
Producer: Lucky Red
The sequel to Under the Riccione Sun, the film follows summer friendships and love stories set in the splendid Amalfi coast. The film is the directorial debut for Martina Pastori and stars Lorenzo Zurzolo, Ludovica Martino, Isabella Ferrari, Luca Ward among the main characters.

Jumping From High Places
Producer: Lotus Film
Inspired by the novel of the same namel, the exciting story of Sole, a young woman who, after her best friend’s death, will try to face and overcome all her greatest fears. Directed by Andrea Jublin and starring Federica Torchetti, Lorenzo Richelmy, Cristiano Caccamo, Celeste Savino, Anna Ferruzzo and Massimiliano Gallo.