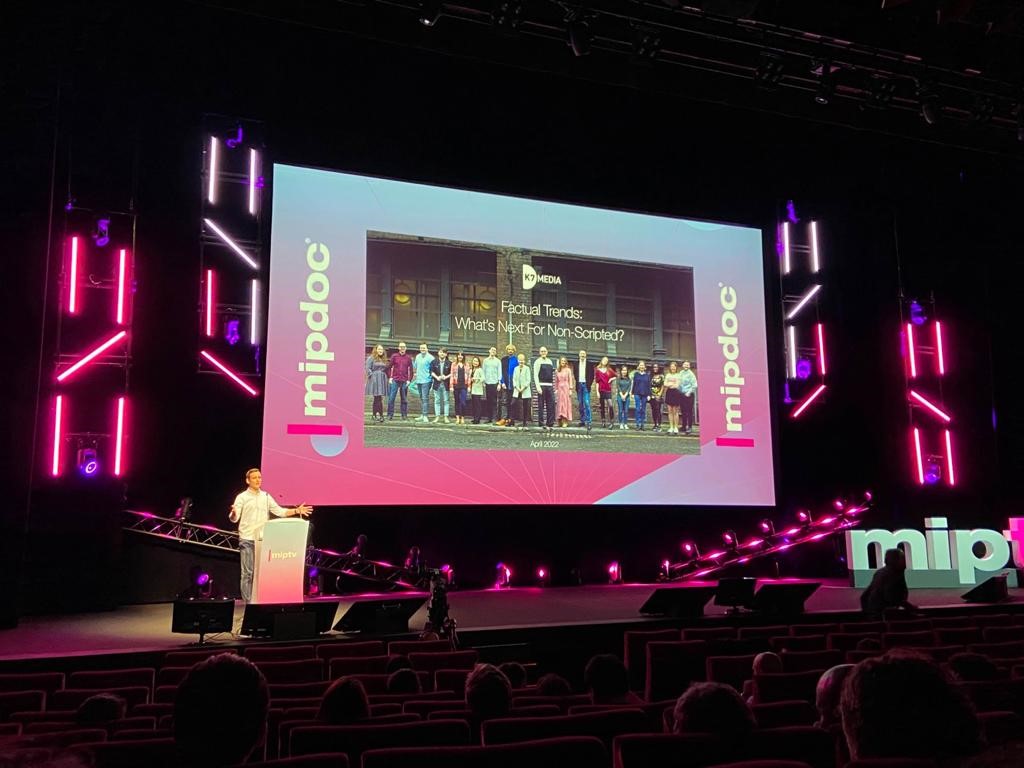 K7 Media's Communications Manager David Ciaramella explored the factual landscape in 2022 of non-scripted television across multiple territories during the panel Factual Trends K5 Media at the Debussy Theatre on Monday, April 4, 2022 in Cannes.
"It’s safe to say that we are living through some pretty fraught times - he said- some shy away, cocoon up and try to escape. But I say never has there been more urgency to report the truth. Whatever that means in these strange times. and I truly believe that never before, in recent memory at least, has the role of the documentary and factual filmmaker been so crucial and so significant. The urgency to report on the truth is driving all of the below themes".
One of the first theme highlighted is Internet and social media impact.
The first title presented by Ciaramella is filmed by documentarian Louis Theroux with Forbidden American - "He speaks to creators who promote far-right views, self-destructive performers - and in some cases alleged predators, and explores the impact of the internet and social media with his typical Theroux style". Other title is Hacked (Sweden) which challenges four professional hackers to attack the digital systems of individuals and companies. The companies and individuals want their systems to be tested, to find the gaps in the security and so the hackers are set challenges to achieve within a time limit.
In Huxi and the Conspiracy Theorists from Danish producers Straight Outta Assens, the popular host Huxi Bach meets with both conspiracy theorists and scientists in an effort to get wiser on not just the truth of each subject, but also where the more extreme theories stem from. "Every episode covers a new conspiracy theory, from the coronavirus vaccine to the power of 5G".

Trust Me from Wadi Rum Films in association with the Getting Better Foundation, explores how negative news and misinformation can lead to polarisation, racism, mental health disorders and crime.
Netflix recently launched The Tinder Swindler and the Puppet Master, both about manipulative men, while in You are Fucking with the Wrong People, a group of young women come together to fight against an imposter who scammed them all, persuading them to send intimate pictures of themselves.

BBC Three’s Dating’s Dangerous Secrets spotlights some of the popular dating apps like Tinder, Bumble and Hinge and how they now play a major role in many young Brits' love lives, despite a rising number of sexual assault cases which have been reported after meeting someone on an app. Reporter Linda Adey investigates the safety of the apps and asks whether they should be doing more to protect their users.

Another important topic is Diverse Voices and this theme said Ciaramella - “is centred around diverse and normally unheard voices finding their place onscreen, broadening the understanding of their plight to a much wider audience than previously encountered. Some are focused on highlighting and often celebrating those of differing abilities and the neurodivergent members of society, others around issues of race and gender”.

True Colours is about an art school for those with disabilities, See Me As I Am is a warming film about a young woman who struggle to find her place in the world, despite her autism.
In All That Remains to Be Seen a blind mother and her seven-year-old son teach each other how to navigate the world as his vision slowly fades and a new life awaits.

Beauty and the Bleach is a new launch from Hat Trick International, in which Tan France (star of the Netflix revisioning of classic reality format Queer Eye), explores issues around skin tone and colourism in society, as well as the fashion, entertainment and beauty industries.

The third theme presented by David is Saving Humanity -centred on the bigger challenges like climate change and building human communities like in Last Exit: Space dedicated to colonise space or How to Survive a Pandemic on HBO Max. In The Race to Save the World a group of activists fight against climate change and in Curb Your carbon, Hollywood star Ryan Reynolds try to grab the global attention on an environmental program.

To end his presentation about the hottest documentary, David pointed out the theme of New Perspectives on War: ”Unfortunately for too many people around the world, it’s a subject all too real, not least our friends in Ukraine” – said Ciaramella. In When the Bomb Falls, journalist Danny Ghosen visits Iraq to talk to the victims of the 3 June 2015 bombing of Hawija, an operation undertaken to destroy an IS bomb factory which also killed an estimated 70 civilians.
Long-running ARD series Deep and Explicit narrates a new perspective from the point of view on young people in Ukraine and in Russia right now. In one segment, we hear from the young Ukrainian activist Olena Taran who takes to the streets to protest whilst her family is under imminent threat from Russian attacks living in a small town in central Ukraine.
More titles about the conflict in Ukraine are: the award-winning A House Made of Splinters which instead looks at the fallout from the previous 8 years of war in the East of Ukraine, this time noting the heavy toll on poor families living near the frontline, and the small group of strong-willed social workers working tirelessly in a special kind of orphanage to create an almost magical safe space for kids to live in while the state decide the future fate of the child and family affected by instability in the region. It’s a truly heart-wrenching watch.

La Story Zelensky paints a portrait of the Ukrainian president, from his career as a comedian, through to his election as president and status as an admired leader. Novorossiya on the other hand is a new film from the Ukrainian eastern fronts of Donetsk and Luhansk where the Russian army and pro-Russian separatists had been waging a war against Ukraine even before Putin’s full-scale invasion in 2022.

And finally, we have Wagner, Putin's Shadow Army a French documentary that investigates how the activities of a Russian shadow army, coupled with fake news campaigns, are working silently to promote Russia’s expansionist ambitions and destabilise the West.
David Ciaramella is the Communications Manager at K7MEDIA and he has worked at K7 since 2013, providing additional support to K7 clients with updates on trends and developments across the video landscape. He regularly travels to various territory markets to liaise with K7's international network of clients and stringers, presenting on tv and video trends with a focus on unscripted formats and digital platforms.