Pilgrimage - The Road to the Scottish Isles on BBC Two 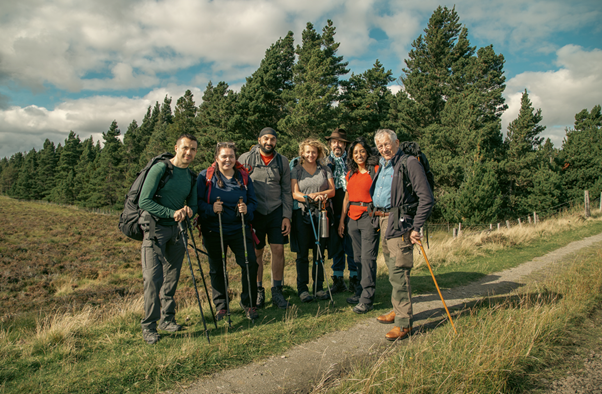 The critically acclaimed series Pilgrimage returns to BBC Two and iPlayer in the Spring with a new 3 x 60-minute series, as seven well known personalities of differing faiths and beliefs embark on a journey of religious and spiritual awakening across land and sea, from Ireland to Northern Ireland and Scotland. The Pilgrimage: The Road to the Scottish Isles celebrity pilgrims are interior designer and TV personality, Laurence Llewelyn-Bowen, who describes himself as a non-conforming pagan; England cricketing legend, Monty Panesar – a practising Sikh; actress, Louisa Clein, who is Jewish; TV personality Nick Hewer – an agnostic with Catholic roots; social media influencer, Scarlett Moffatt – a self-conscious Christian; comedian, Shazia Mirza – a Muslim; and Paralympian, Will Bayley – a lapsed Christian.
Over fifteen days, the seven pilgrims will follow in the footsteps of the sixth century Irish monk, Saint Columba, seeking out his legacy as a key figure in early British Christianity who helped spread the faith from Ireland to Scotland and beyond.
Following ancient pilgrimages and heritage walking trails, the celebrity pilgrims begin their journey in the town of Donegal in the Republic of Ireland, then travel through Northern Ireland and over the sea by boat to western Scotland. From there, they head up towards the Highlands before exploring the Hebridean Isle of Lewis and Harris. They go to Stornaway and then to the Calanais Stones before arriving at their final destination, Iona, a tiny island in the Inner Hebrides and the site of Saint Columba’s most revered monastery. Covering more than 1600km, they visit places of worship, from pagan stones to an early Christian cave and a contemporary mosque and Sikh temple. This journey will test the pilgrims not just spiritually but physically too.