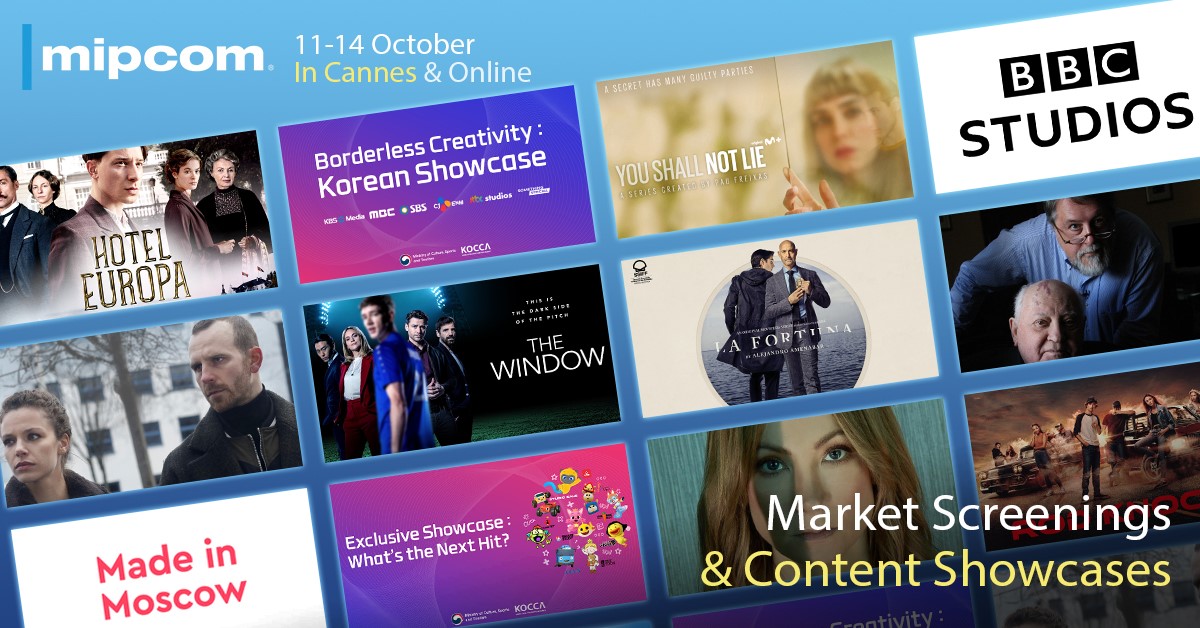 MIPCOM 2021 will welcome the industry back to the Palais des Festivals in Cannes, 11-14 October, for the first major international market to take place in person since 2019. From Monday 11 October to Wednesday 13 October, more than 15 market screenings and showcases will be presented to delegates, buyers and international press, offering an exclusive look at the most-anticipated series and programmes across all genres from around the world.

Lucy Smith, Director of MIPCOM, said: “It’s wonderful to have such a strong line up of exclusive screenings and showcases for our return to Cannes. A big thank you to all our partners for their participation which really underlines the strength, creativity and diversity of the content at MIPCOM.”
Exclusive screenings include:

HOTEL EUROPA (BETA FILM)
Based on true events which shaped Germany between the wars, Hotel Europa is the untold story of a generation: The chronicles of a hotel frequented by Charlie Chaplin, Konrad Adenauer, and Adolf Hitler. The limited series is directed by Thorsten M. Schmidt (Divorce For Beginners), produced by Zeitsprung Pictures for ARD Degeto and stars Jonathan Berlin (Summer of ‘44), Benjamin Sadler (Luther) and Katharina Schüttler ( Generation War).

ANGELA BLACK (ALL3MEDIA INTERNATIONAL)
Psychological thriller reuniting award-winning Two Brothers Pictures with Golden Globe winner Joanne Froggatt as the eponymous Angela Black. Trapped in a relationship she can’t escape, Angela’s life switches from domesticity to private detectives and buried secrets as she risks everything to fight back against the man who suppressed and tormented her for most of her life.

LA FORTUNA (BETA FILM)
A visually stunning drama inspired by true events: the recovery of the biggest treasure of the oceans. From Oscar®-winning director Alejandro Amenábar (The Sea Inside, The Others), starring Oscar®-nominated Stanley Tucci (The Hunger Games, Road To Perdition, The Lovely Bones).

THE WINDOW: THIS IS THE DARK SIDE OF THE PITCH (ZDF ENTERPRISES)
Created and written by BAFTA and EMMY award-winning screenwriter James Payne (The Musketeers, Hooten & the Lady, Mr. Selfridge), The Window is a character-based drama thriller set in the world of elite professional soccer. Focusing on an ensemble cast of players, agents, club owners, administrators and journalists, the series explores the cutthroat off-field machinations of the game.

YOU SHALL NOT LIE (MOVISTAR)
A six-hour crime drama-thriller, You Shall Not Lie (“Todos Mienten”) is produced by Filmax, the Barcelona-based production-distribution-sales studio behind Freixas’ The Red Band Society as well as a recent string of hits: I Know Who You Are, Welcome to the Family and Netflix’s Three Days of Christmas.

ROD KNOCK (BETA FILM)
Produced by Fenomen and Storyline for Norwegian pubcaster NRK, the 16×25' series follows a group of young gearheads as they deal with the trials and tribulations of early adulthood, including heartache, uncertainty and loss.

UNINTENDED CONSEQUENCES: GORBATCHEV'S LEGACY FROM PERESTROIKA TO PUTIN (US Agency of Global Media - USAGM)
Acclaimed documentary filmmaker Vitaly Manskiy and Current Time TV’s Pavel Butorin and Kenan Aliev will host a discussion and screening of GORBACHEV. HEAVEN, a documentary film about changes that reverberated throughout the world wrought by one man. A film summing-up the life of a man who changed the course of history which was punctuated by the collapse of the Soviet empire.

CRUSADE (TVP)
The plot of this contemporary crime drama focuses on the investigations conducted by Detective Jan “Manjaro” Góra and his colleagues from the Crime and Criminal Terror Division of the Warsaw Metropolitan Police, investigating a spate of interconnected high-profile kidnappings and murders committed by an anti-system terrorist organization operating in Warsaw.
Among the content showcase highlights are:

EXCLUSIVE SHOWCASE : WHAT’S THE NEXT HIT?
Sponsored by Korea Creative Content Agency (KOCCA)
This Korean showcase will share 9 animation titles with the potential to be game changers in the content market, not only affecting the traditional linear media but OTT, gaming and licensing firms. This showcase is a perfect opportunity to witness the next generation animation trend.

BORDERLESS CREATIVITY : KOREAN SHOWCASE
Sponsored by Korea Creative Content Agency (KOCCA)
Currently, there is a huge global demand for Korean TV series, especially for global streaming platforms. At “Borderless Creativity : Korean Showcase”, you will find the creative K-dramas and K-formats that are poised to become the next international hits; shows with bold imagination, intense storylines, and high production values. The showcase features up-to-date content from major Korean broadcasters and a format production company.

MADE IN MOSCOW (MEC Moscow Export Center)
A selection of eighteen Moscow-based companies with the support of Moscow Export Center will present their projects within the united «Made in Moscow» brand. The selection of projects demonstrates the most ambitious potential for the export activities.
To kickstart a week of world class content, MIPCOM and CANNESERIES are proud to present the World Premiere Screening of AROUND THE WORLD IN 80 DAYS (Sunday 10 October). The series, telling the well-loved story of the race around the world of an English gentleman, Phileas Fogg, is co-produced by the European Alliance formed by France Télévisions, ZDF and RAI, with additional co-production partners, Peu Communications in South Africa, Masterpiece PBS in the USA, Seven West Media in Australia, Be-FILMS and RTBF in Belgium and Daro Films.

Also featuring during MIPCOM’s week of global content showcases are the 12th Annual MIPCOM Buyers' Awards for Japanese drama, held in partnership with the Bureau of International Drama Festival in Tokyo will present and promoting Japanese content and FRESH TV SCREENINGS, presented by The Wit, highlighting the latest content from around the world.