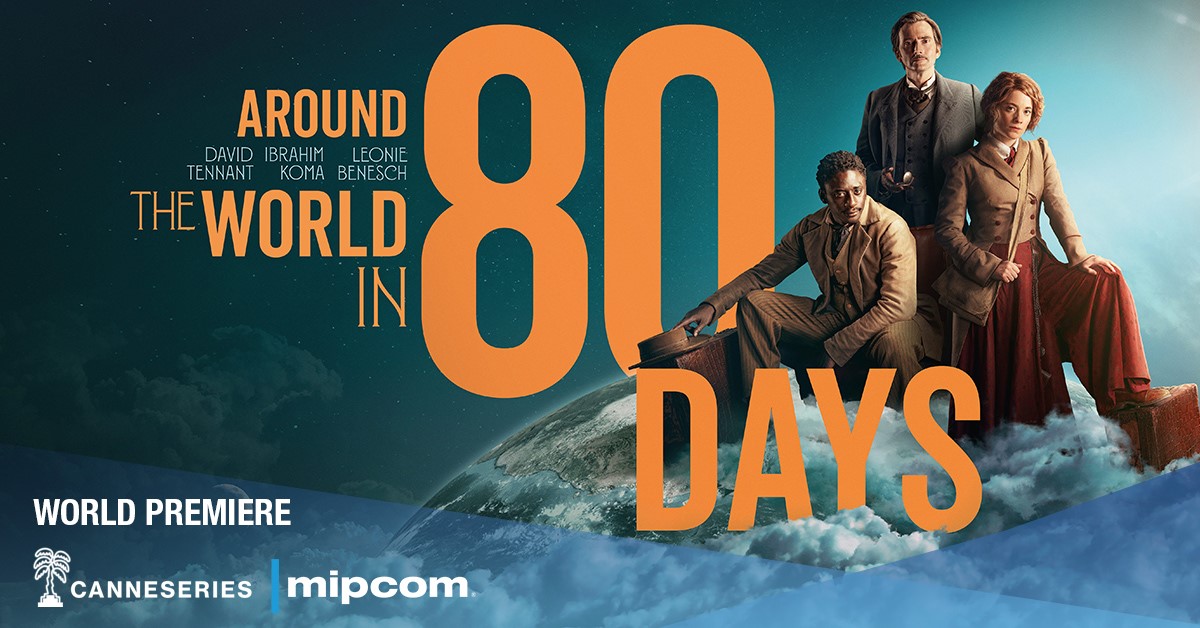 CANNESERIES will be back in Cannes from October 8th to October 13th 2021 for its season 04. Although the selection won’t be announced before the beginning of the fall 2021, a veil is lifted on one of our shows out of Competition: AROUND THE WORLD IN 80 DAYS (LE TOUR DU MONDE EN 80 JOURS), a new adaptation of the famous novel by Jules Verne.

Adapted by Ashley Pharoah (Life on Mars, Ashes to Ashes) and Caleb Ranson (Child of Mine, Heartless), co-produced by Slim Film + Television and Federation Entertainment for France Télévisions, ZDF, Rai (the European Alliance) as well as BBC, Masterpiece PBS and Seven West Media in Australia just to name a few, the series tells the story of the race around the world of an English gentleman, Phileas Fogg, who bets to do so in 80 days. Joined by his valet, Jean Passepartout, and a journalist, Abigail Fix, he will live incredible adventures during an extraordinary journey occurring in the 19th century.

David Tennant (Des, Good Omens) takes on the costume of the illustrious Phileas Fogg (a tie, a hat and a moustache). His irrepressible valet is played by the French actor Ibrahim Koma (OSS 117, Wùlu). As to Abigail Fix, the young journalist ready to follow them around the world, she will be portrayed by the young actress Leonie Benesch (The Crown, Babylon Berlin). The series is directed by Steve Barron, Brian Kelly and Charles Beeson.

« We are happy to announce the World Premiere screening, in association with the MIPCOM, of this highly awaited series, which allows us to encounter the amazing world of Jules Verne again and to dive again into these adventures full of twists. We are especially delighted that the first series we announced is the result of a co-production between France, Germany, Italy, the UK, Australia, South Africa, Belgium and Switzerland. For an international Festival like CANNESERIES, these international collaborations are crucial. We wait with great impatience to travel AROUND THE WORLD IN 80 DAYS on the big screen of the Lumière Theater of the Palais des Festivals et des Congrès of Cannes. » says Albin Lewi, Artistic Director of CANNESERIES.

Lucy Smith, Director of MIPCOM, says: “We are thrilled to be returning to the Palais des Festivals for CANNESERIES and bringing together the distribution and production communities for this first major reunion of the international television industry. We could not ask for a better opening to the market than the premiere of AROUND THE WORLD IN 80 DAYS, a hotly anticipated new series and major European co-production.”

AROUND THE WORLD IN 80 DAYS is co-produced by Slim Film + Television (Simon Crawford Collins) and Federation (Lionel Uzan, Pascal Breton) for the European Alliance formed by France Télévisions, ZDF and RAI, with additional co-production partners, Peu Communications in South Africa, Masterpiece PBS in the USA, Seven West Media in Australia, Be-FILMS and RTBF in Belgium and Daro Films. The series has been acquired by BBC in the UK and RTS in Switzerland. Federation will handle distribution rights to the series.

The season 04 of CANNESERIES will take place from October 8th to 13th 2021, in parallel with the 37th edition of MIPCOM, the World’s Largest Entertainment Content Market (October 11th-14th).