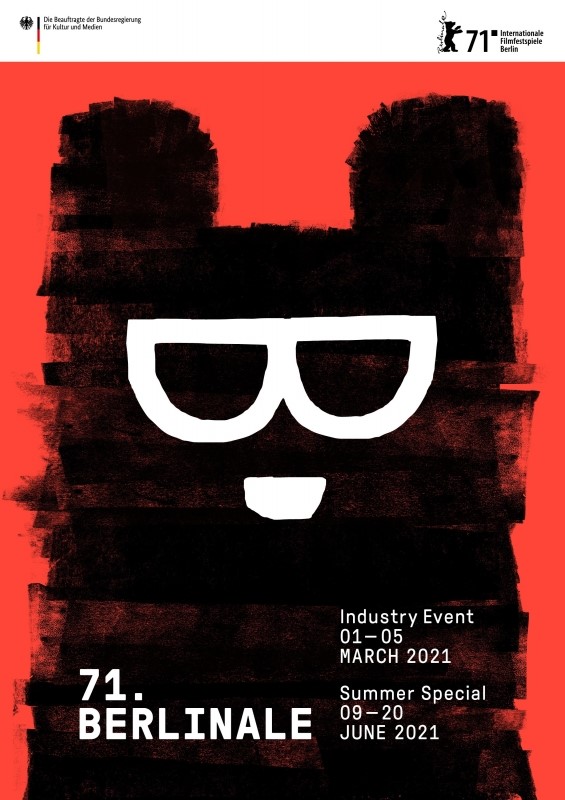 The 71st Berlin International Film Festival opens today with a virtual online form.
The event takes place in two stages: The Industry Event for industry professionals and accredited press marks the kick-off from March 1 to 5, 2021. From June 9 to 20, the Berlinale invites the general public to the Summer Special.

“This year's Berlinale Bear is a typical Berlin character. The likeable hand-made motif exudes optimism in these challenging times and spreads a thrill of anticipation for the two stages of the film festival,” comments Berlinale Executive Director Mariette Rissenbeek on the motif for the Berlinale 2021.

Currently, 780 films are already registered for market screenings, of which two thirds are market premieres. Over 470 companies from almost 60 countries have registered, including almost 200 companies who are participating in the EFM for the first time. The number of accreditations is also closing in on last year’s high level of participation. “These positive numbers confirm that this year’s virtual edition of the EFM is also in high demand, and they reinforce the decision to go forward with the unusual format in an unusual year. In the first quarter of the year, the EFM is the focal point of the international film business,” comments EFM Director Dennis Ruh.

“EFM Industry Sessions” Conference Programme
At the “EFM Industry Sessions”, industry professionals can look forward to a comprehensive, five-day conference programme with around 90 talks, seminars, round tables, pitches, podcasts, presentations, keynotes, workshops, think tanks, masterclasses and showcases with internationally renowned speakers. The programme will be supplemented with networking and well-being offerings for the purpose of taking a breather, as well as the virtual Berlinale kindergarten, which will be provided by the initiative “Parenting at Film Festivals”. The “EFM Industry Sessions” are supported by Medienboard Berlin-Brandenburg.

The thematic focal points in this edition are the digitalisation of the film and media business, social sustainability, and diversity and inclusion in the film industry. These areas will be discussed from different perspectives in think tanks and seminars, and the results will be presented at the closing event.

The “EFM Industry Sessions” will be officially opened on March 1 at 4 pm CET by EFM Director Dennis Ruh, moderated by Annabelle Mandeng. The kickoff event will take a look at the status quo in the industry, and introduce the conference week subjects.