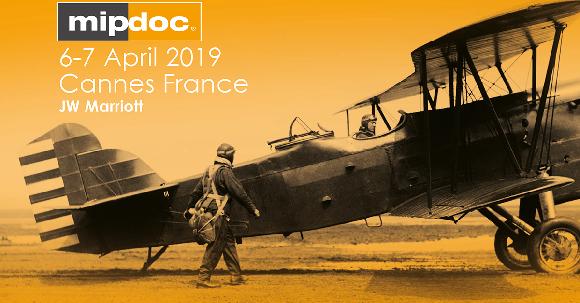 MIPDoc 2019 will feature a series of high-profile premiere showcases from ZDF Enterprises and its new partner Off the Fence, Smithsonian Channel in conjunction with Arrow Media, plus a World Premiere TV Screening from French distributor About Premium Content.

MIPDoc, the world’s largest conference and co-production marketplace and screenings library for the factual community, takes place in Cannes, France on 6 and 7 April 2019, ahead of the MIPTV, the international market for content development and distribution, which runs in the city from 8-11 April.

The MIPDoc programme this year will focus on accelerating content development and discovery, through a string of strategic updates from key players shaping the factual industry, plus exclusive previews of upcoming high-end content.

Two of the world leaders in non-fiction content, ZDF Enterprises and Off the Fence have recently joined forces, their combined catalogues - consisting of thousands of hours of award-winning factual programming - offer fresh perspectives and high production values across a wide range of genres. At MIPDoc, Off the Fence Founder and CEO Ellen Windemuth and ZDF Enterprises’ VP Unscripted, Co-CEO Off the Fence, Ralf Rueckauer, will present their strategy for their future cooperation and their latest programme highlights.

Following Smithsonian Channel’s February 2019 launch in the UK and Ireland, MIPDoc plays host to a sneak preview and creative conversation surrounding the launch of “Britain in Colour” – the network’s first European original franchise in partnership with Arrow Media, based on its popular signature US series “America in Colour.” David Royle, EVP and Chief Programming Officer, Smithsonian Channel and Sam Starbuck, Executive Producer, Arrow Media, will outline their ambitions for this partnership to MIPDoc delegates.

As part of the France MIPTV Country of Honour showcase, MIPDoc will host the French Touch Showcase, featuring a unique selection of the latest and most ambitious documentaries produced in France, in partnership with TV France International. This will include the World Premiere TV Screening of “French Loving,” presented by About Premium Content. With a stylish design, views of famous personalities and many references to history, news and pop culture, this documentary takes viewers on an exciting journey through the (French) looking glass.

MIPDoc this year also launches “In Development Doc,” featuring two MIPDOC Project Pitches in the categories “Science & Technology” and “Current Affairs & Investigation,” which are open to all creators and producers seeking to develop factual and documentary projects with co-production partners. The finalists will have the opportunity to pitch their projects to a jury of international decision-makers, including: Chris Hoelzl, Smithsonian Channel; Hiroaki Katayama, NHK Japan Broadcasting Corp; Martin Pieper, ZDF; Bernadette McDaid, National Geographic; and Marita Huebinger, ARTE/ ZDF.

MIPDoc will also feature a series of matchmaking sessions with buyers and commissioners as well as Content Strategy sessions from platforms and broadcasters from across the globe, such as Bilibili, CuriosityStream, Tencent, National Geographic, and France Télévisions Group. Key content executives will share their programming, acquisition and commissioning strategies over 30 minutes. This quality time allows produce