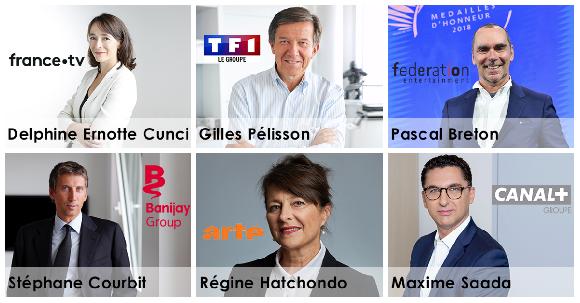 An unprecedented line-up of leading French television executives are set to keynote as part of MIPTV 2019’s France Country of Honour conferences.

MIPTV, the international market for entertainment content development and distribution, takes place in Cannes, France from 8-11 April 2019. The MIPTV France Country of Honour programme will include a series of conferences promoting the vibrant French TV industry, including several high-power keynote interviews with top executives from French broadcasters and leading production groups. Taking place on the main stage in the Palais des Festivals, these will give MIPTV delegates an exclusive insight into the creative ambitions of France’s talent, and explain the enduring appeal of Gallic programming to worldwide audiences. The keynote speakers will also outline their strategic initiatives to enhance the reach of French output, and sketch out their vision of the industry’s future in the face of new international alliances, technological innovations and the delinearisation of content consumption. Attendess will also get a sneak peek at some upcoming French product.

The keynotes so far confirmed are:

- Delphine ERNOTTE CUNCI, President of the public broadcaster FRANCE TÉLÉVISIONS . She began her career with France Télécom, rising from financial analyst to Managing Director of the group, now called Orange. In 2015, Ernotte Cunci was appointed president of France Télévisions, the first woman to hold this post. The state broadcast group operates six national networks and a string of international and theme channels, plus TV and film production entities and the international sales arm, France Télévisions Distribution.

- Gilles PÉLISSON, Chairman and Chief Executive Officer of TF1 Group , France’s leading free-to-air network, since 2016. In 1995, he became CEO of Eurodisney before being appointed Chairman and CEO in 1997. In 2000, he headed up the management team at the Suez-Telefonica consortium ST3G, and became non-executive Chairman at Noos, France’s leading cable network. Gilles Pélisson joined Bouygues Telecom in 2001 as CEO and was appointed Chairman & CEO in 2004. In 2006, he became CEO and a Board member of the Accor group before being appointed Chairman and CEO in 2009, a position he held until 2011. Until 2016, Gilles Pélisson held non-executive directorships in a number of listed multinationals: Bic (Paris), NH Hotels (Madrid) and Accenture (New York).

- Régine HATCHONDO, Director-General of ARTE France , the French half of the Franco-German cultural broadcast group ARTE. Hatchondo has a long career in the French audiovisual industry, including spells as head of the Forum des images in Paris, the Cannes Film Festival’s sidebar Directors’ Fortnight, and the French film promotion and export body UniFrance. She has also worked as an advisor on cultural and media affairs for the City of Paris and former Prime Minister, Manuel Valls.

- Stéphane COURBIT, Marco BASSETTI, and François DE BRUGADA of the Gallic-based production and distribution powerhouse, BANIJAY GROUP , will share the stage together. Chairman of Banijay, Courbit, began as an independent producer before merging his company to form Endemol France in 1998. He later created Banijay Group, today the world’s largest independent production and distribution company with annual revenue of around €1 billion. He will be interviewed alongside CEO, Bassetti, a leading entrepreneur renowned for founding Endemol Italy before becoming President and CEO of Endemol Group; and CEO of Banijay France, De Brugada, who has long and successfully led France’s most prevalent production business – Banijay France.

- Another joint keynote interview will feature Pascal BRETON and Patrick WACHSBERGER, the duo behind the new joint-venture PICTURE PERFECT FEDERATION , dedicated to the production of premium TV series for the US marketplace and international coproductions. Breton co-founded French independent producer Marathon in 1990 (“St Tropez”). He founded Federation Entertainment in 2013, and recently joined forces with Picture Perfect Entertainment, the production banner of Wachsberger, Co-Chairman of the Lionsgate Motion Picture Group for the past six years, and oversaw the critically-acclaimed breakout hit “Wonder” and the global box-office phenomenon “La La Land”.

These keynotes are all scheduled on April 8 and 9. French audiovisual creativity will be showcased throughout MIPTV as part of the the Country of Honour programme, with premiere screenings and promotional events.

“This year’s MIPTV Country of Honour programme will showcase the incredible creativity of France’s television industry. No other event brings together so many of France’s leading television executives to address delegates from over 100 countries, and as a French company, Reed MIDEM is proud to play its part in the promotion of French television around the world,” comments Laurine Garaude, Director, TV Division, Reed MIDEM, which organises MIPTV.