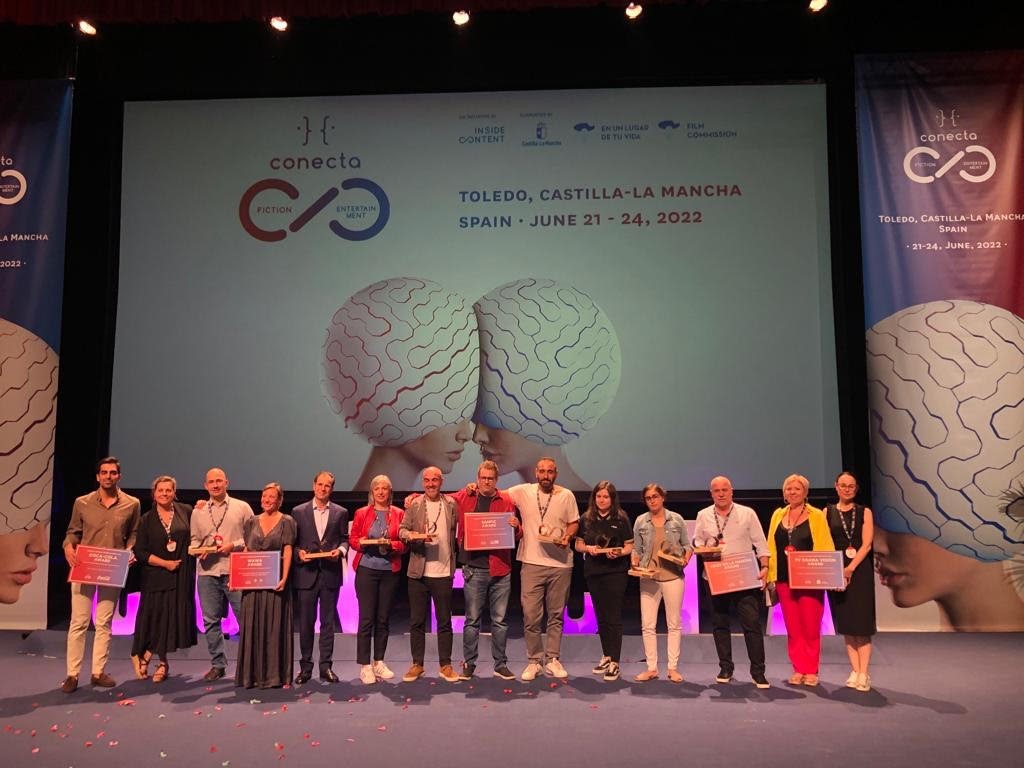 The Conecta FICTION & ENTERTAINMENT 2022 awards ceremony was held this afternoon, where the winners of the various awards given to the projects participating in the five pitching categories organised for this year's edition were announced: Copro Series (series and short - form series), High-End Series (high-budget projects), Docudrama Series (dramatized documentaries), Feelgood Formats(original entertainment formats with a “feel good” component) and Pitch Clips(call by ALMA Spanish scriptwriters guild). The gala, held at 19:30 in the auditorium of the Palacio de Congresos El Greco in Toledo and hosted by the presenter Manuel Feijoo and the event director Géraldine Gonard, was preceded by the panel "Showrunners coming from Europe and America" with the participation of two key figures of the international audiovisual industry: the Spanish director Paco Cabezas and the British scriptwriter Ben Harris, with the moderation of Richard Middleton, renowned journalist and editor of the specialist British magazine TBI.

Awards in the sixth edition of Conecta F&E

CASTILLA-LA MANCHA MEDIA AWARD, consisting of the recording of a promotional clip of the project and its promotion on Castilla La-Mancha TV: THE MOST SPECTACULAR ROBBERIES / Zona Mixta (Spain)

ACORDE AWARDS, consisting of both licenses for 2 projects to use its music library for their first season: FLOS MAR**E: FAKE OR NOT / CTV (Spain) and THE LAST WOLF / SPi & Caracol Studios (Portugal)

ALMA AWARD, recognition for the best Pitch Clip by the ALMA guild: A WICKED LIFE by Leire Albinarrate

TRIODOS BANK AWARD, consisting of €3,000 to the Pitch Clip that best represents the value of creativity development promoted by Triodos Bank: A WICKED LIFE by Leire Albinarrate

WAWA AWARD, consisting of a membership and pitch at WBF: FROM 6 TO 8 PM / Fandango (Italy)

LA MANCHA WINES AWARD, consisting of weight of the winner in wine: THE MOST
SPECTACULAR ROBBERIES / Zona Mixta (Spain)

COCA-COLA AWARD, consisting of winner’s stature in Coca-Cola: WHO IS MY HUMAN? /
Mediacrest Entertainment (Spain)