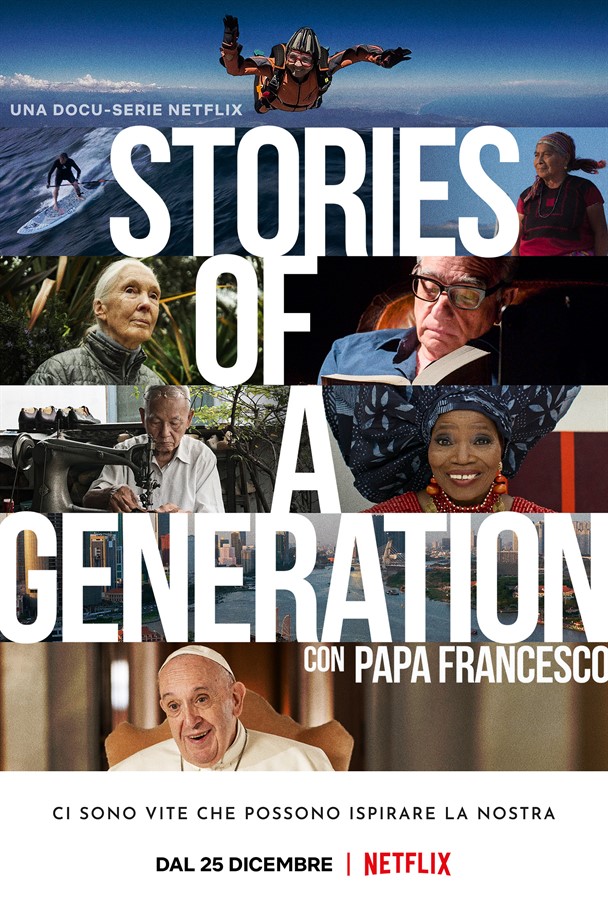 Netflix  will launch on December 2021  Stories of a Generation with Pope Francis,  4-episode docu-series inspired by Sharing the Wisdom of Time, the award-winning book written by Pope Francis and edited by Antonio Spadaro, published by Loyola Press (in Italy published by Marsilio). The docuseries - by Simona Ercolani, with the editorial consultancy of Antonio Spadaro and produced by Stand By Me, partner of Asacha Media Group - will be available on Netflix from Saturday 25 December in all countries where the service is available.

Stories of a Generation with Pope Francis shares an enchanting tale of elders as a treasure to be rediscovered, told through the eyes of the younger generation. Women and men over age 70 from all over the world tell their amazing stories in front of the cameras of talented young filmmakers under the age of 30. These are 18 incredible stories shot across the 5 continents throughout one year.

Each of the four episodes of the docuseries touches upon one of the great themes that bring human beings together - love, dreams, struggle, work - through the events and experiences of women and men of different backgrounds, social status, cultures and religions from all over the planet and who embody humankind’s universal values. Joining the collection of different voices and making this meeting between generations unique, is the extraordinary conversation between Antonio Spadaro and Pope Francis who is the common thread of the four episodes of the series. In his exclusive conversation, the Holy Father shows himself not only as the spiritual guide that everyone knows, but also as Jorge Mario Bergoglio, a man among men, who shares his life experience by dispersing anecdotes, stories, personal, unpublished and original memories throughout the episodes.

EPISODE 1 - LOVE
The first episode, which had its World Premiere at the Rome Film Fest, deals with the great and universal subject of love. American Academy Award-winning director Martin Scorsese, for the first time, reveals aspects of his life during an intimate interview, shot by her daughter, filmmaker and actress Francesca Scorsese. Famous English ethologist and environmentalist Dr. Jane Goodall, DBE (Dame Commander of the Order of the British Empire), founder of the Jane Goodall Institute and UN Messenger of Peace, retraces the studies that revolutionized the way humans relate to animals, revealing the secret behind her work. Other protagonists, less popular but with equally extraordinary lives, are Vito Fiorino, who in 2013 saved 47 shipwrecked off the coast of Lampedusa, Estela Barnes de Carlotto, founder of the Abuelas de Plaza de Mayo movement in Buenos Aires, Carlos and Cristina Solis, an elderly Uruguayan couple passionate about tango.


EPISODE 2 - DREAMS
The second episode tells about dreams of men and women from different countries all around the World. New Zealand scientist David Lowe was among the first to denounce global warming: he is one of the authors of the report on climate change that won the Nobel Peace Prize in 2007, and today he joins with his voice the young people who are demonstrating throughout the world.
American Betty Kilby retraces the footsteps of her dramatic past to meet the descendant of the family who kept her ancestors in slavery, making one of Martin Luther King's great dreams come true: the children of ancient slaves and slavers sitting together at the table of brotherhood. Danilo Mena Hernandez, a farmer who lives in a forest in Costa Rica, makes the dream of his blind children come true by bringing them to "see" the sea with their hands for the first time; at 89 years old, Spanish lady Montserrat Mechò still skydives: since she started she has done more than 900 jumps, in memory of her son who died in a tragic accident.

EPISODIO 3 - STRUGGLE
The protagonists of the third episode put Struggle at the center of their lives, from small daily battles to the most important claims for human rights.
Austra Bertha Flores, the first female mayor of Honduras, talks about her struggle for the rights of the weakest in her country and her personal battle to ensure that the perpetrators of her daughter's murder do not go unpunished; South African photographer Omar Badsha, who was one of the leaders in the fight against the Apartheid regime, fulfills a promise after 40 years. And also: Felipe Pomar, the first world surfing champion in the 60s who found his greatest strength in fear, and Gisèle Assouad Marie Sabbagh, a Syrian refugee in Lebanon who at 87 years old must face yet another relocation in her life.


EPISODE 4 - WORK
The fourth and final episode is dedicated to work. In the episode, Academy Award-winning director Martin Scorsese talks with his daughter, filmmaker and actress Francesca Scorsese, about the origins of his vocation for cinema. Nike Okundaye, one of the most famous African artists in the world, tells the difficult path that led her to where she is today. The episode also tells the stories of Dona Natalia, a 73-year-old Mexican "partera" (midwife in Spanish) who, following the most ancient traditions, accompanies women in one of the most exciting moments of their life: giving birth to a child; Trinh Ngoc, a 90-year-old Vietnamese shoemaker who has made his work a real mission; and Moshe Basson, an Israeli chef who owns a restaurant in Jerusalem, where he re-creates food, dishes and recipes mentioned in the Bible, in order to pass on memory through smells and tastes.