Conecta and Prensario signed a strategic alliance to promote meetings 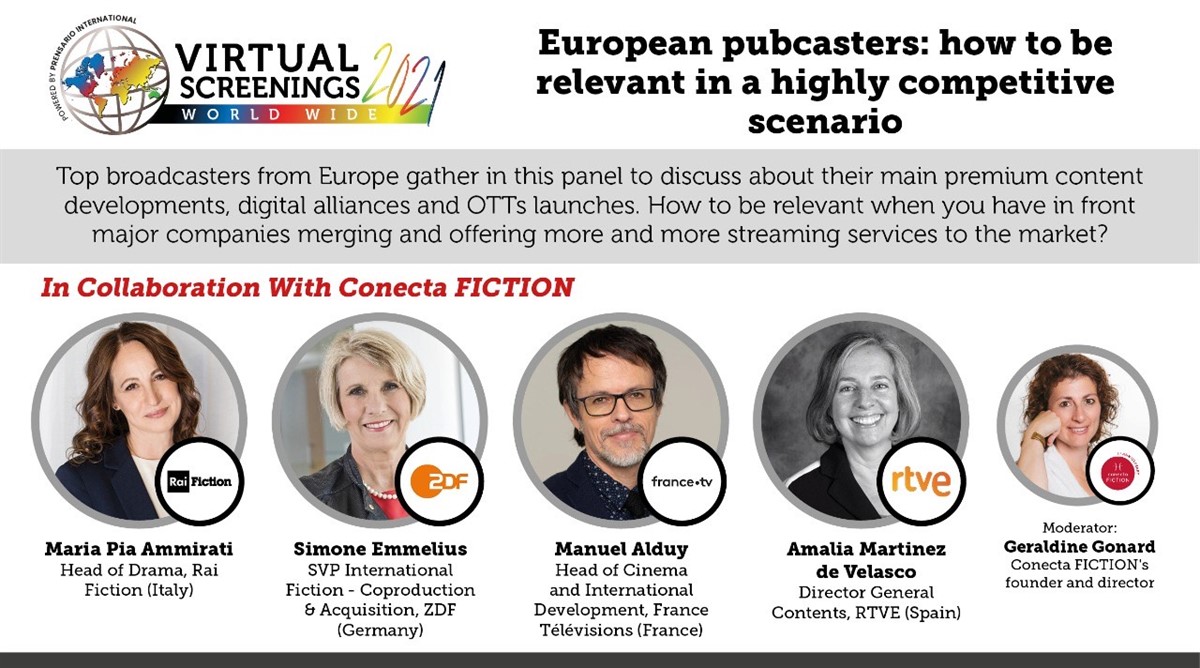 Inside Content, in charge of Conecta FICTION (13th to 17th September), and Prensario International, creator of Virtual Screenings Worldwide (21st to 30th September), sealed a new strategic alliance to promote their meetings on a global level through the co-production of the panel "European Pubcasters: how to be relevant in a highly competitive scenario".
With its premiere scheduled for 13th September at Conecta FICTION and 23rd September at VSWW, the panel brings together four of Europe's leading public broadcasters to discuss the current state of their local markets and, above all, how they are carrying out their projects in a context of strong competition imposed by the new OTT majors on the old continent.

Formed in May 2018 during Series Mania, the first three pubcasters are part of the European Alliance, a binding cooperation platform that has generated five high-budget series. The first of these was Mirage, an ambitious USD 3 million per episode thriller of intrigue and espionage starring Marie-Josee Croze (Jack Ryan) and Clive Standen (Vikings), produced by Lincoln TV (France) and Connect3 Media (Canada) for France 2 (France), ZDF (Germany), Bell Media and Superchannel (Canada).

Other projects include an adaptation of Jules Verne's classic adventure novel Around the World in 80 Days (France Televisions, ZDF, Rai, Seven West Media, Slim Film + Television, Federation Entertainment and 247 Films), the mystery series Survivors (RAI Fiction, France Télévisions, ZDF, Rodeo Drive, Cinétévé) and a series about Leonardo da Vinci called Leonardo (Lux Vide, Big Light Productions, Rai, Sony, France Télévisions, RTVE and Alfresco Pictures).
In the case of RTVE, the Spanish Corporation has been betting for years on high quality fiction while increasing its digital strategy, forming and launching new local and international OTTs through alliances with players of all kinds. Locally, it launched RTVE Play and has Playz for the youngest viewers.

In a context of major OTT launches in Europe, traditional public media groups are teaming up and planning joint projects to compete. ‘In Europe, all public channels have the same goal: we need to collaborate more. The Alliance is a response to the high competition and while each of us keeps the local rights, we want the production to have an impact on the global market,' said Alduy from France TV, who also highlighted as a big bet the idea of presenting the option of a "first look" on Alliance projects to other European channels integrated in EBU.

Five series have been produced so far but there are 15-20 projects in development. Arround the World in 80 Days, led by France Télévisions and due to air next Christmas, “represents the European heritage and our common culture,' added ZDF's Emmelius. 'The Alliance is a flexible way of committing to projects and we don't necessarily have an obligation. We believe in this creative partnership,' added Rai's Ammirati.

As for RTVE, Martínez de Velasco concluded that the great challenges facing public television at the moment is to really know what the audience wants to consume, when and how. ‘The challenge is to be able to offer that content and be relevant’, agreed Alduy of France TV, who added that “one of the biggest challenges is to attract a younger audience without neglecting the traditional public television audience”.


This panel can be followed as part of the Conecta FICTION programme on Monday 13th September and will be part of the content offered on 23rd September through Virtual Screenings Worldwide.
Access to the panel will be by registration and through the website of either event www.conectafiction.com and www.virtualscreenings.com.