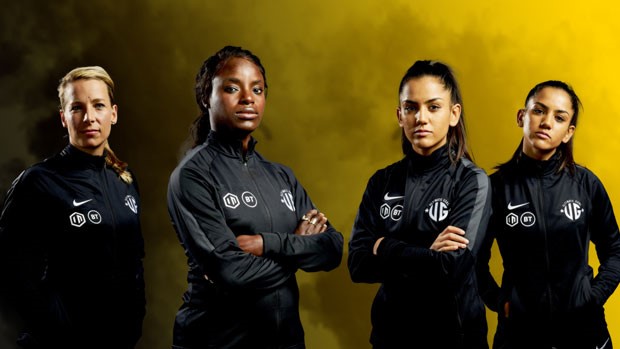 Premiering on BT Sport in early 2021 in the UK and on Insight TV worldwide, and currently in pre-production by Zig Zag Productions (The Next Jamie Vardy, The Football Show), Ultimate Goal will capture the highs and lows as 28 women train and fight for the chance to become future stars of women’s football. Eniola Aluko, the former Chelsea, Juventus and Lionesses player, will host the show.

Eniola, who also played for Saint Louis Athletica, Atlanta Beat and Sky Blue FC in the U.S, will lead a team of football legends who will act as mentors and coaches to the contestant players.

From the 28 women, a team of 14 will be chosen to prepare for a trial match against a top women’s football team, which will be attended by scouts from women’s teams around the world, such as Chelsea, Barcelona, Arsenal, Lyon, and the Orlando Pride.

The series forms part of BT’s commitment, as part of its long-term partnerships with each of the four UK “Home Nations” Football Associations, to inspire a new generation of girls and women to participate in football, on and off the pitch.

BT’s partnership with the associations, launched in February, uses technology, innovation and digital skills to help change the lives of millions of players, coaches and fans. BT Sport has been broadcasting women’s football since its launch in 2013.

Arun Maljaars, VP Content and Channels, Insight TV, said: “Insight TV is always looking to tell compelling stories that are exciting, inspiring and relevant to what’s going on in our world. With Ultimate Goal, we wanted to build on the significant work being done in the UK and internationally to grow the women’s game on and off the field through the power of storytelling. We’re excited to partner with BT Sport to give women’s football the exposure it deserves. We are hoping that this show format will empower and encourage young women to get into football.”

Jamie Hindhaugh, chief operating officer, BT Sport, said: “BT is proud to be involved with a TV series focusing on providing young women with the opportunity to turn their passion into a career. This builds on BT’s work with the four UK Home Nations to create a legacy across women’s football.”

Danny Fenton, CEO of Zig Zag Productions said: “It’s long been our ambition to produce a competition reality series based around women’s football. The game has exploded in popularity and together with Insight TV and BT Sport we aim to create a show that will help to inspire the next generation of talent in the women’s game. We are currently securing talent for the show, both as mentors and contestants.”