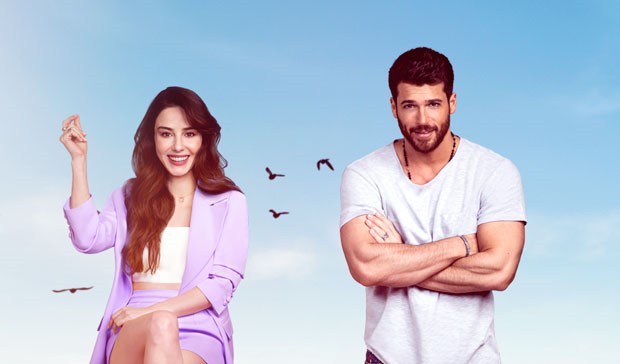 Global Agency has acquired the international rights to the new FOX romantic comedy “Mr. Wrong” starring Can Yaman and Ozge Gurel. The agency has announced that there is huge interest in the series and there are ongoing negotiations in several territories.
The romcom is produced by Gold Film, one of the top producers in Turkey behind proven series such as “Daydreamer”, “No 309”, “Iffet”, “Dila” and “Never Let Go”. Mr. Wrong premiered on FOX Turkey and was the highest rated series on Friday among all target audiences.
It tells the story of Ezgi and Ozgur. A lifetime of betrayal destroys Ezgi’s hopes of ever finding Mr. Right and when she meets the womanizer Ozgur, “Mr. Wrong”, it seems a recipe for disaster. But fate, and nagging mothers, conspire to seek a happy ending. The quest for romance can lead a woman in the wrong direction. No matter how much she seeks Mr. Right, she ends up falling for the wrong man despite her best efforts. Such is the story of the beautiful Ezgi, whose love life is a sorry tale of deception and betrayal.
Can Yaman and Ozge Gurel are the leading actors in the new series. They shared leading roles in “Bitter Sweet” in 2017, in which they had great synergy. Can Yaman, the popular actor of “Daydreamer” and “Bitter Sweet” was the winner of TV's Top Leading Man 2019, in which the majority of votes came from Spain, Italy and Philippines. Both of his series have achieved great success in many countries. The romantic drama “Daydreamer” has quickly become a hit, doubling its channel’s average market share in international markets such as Spain, Greece, Israel and Italy.
Izzet PINTO, Founder & CEO of Global Agency, said: “Mr. Wrong” was the most anticipated series of the summer. We are very happy to continue our cooperation with Gold Film and represent the new series of Can Yaman. This series is our first major collaboration with FOX TV and we look forward to building a stronger partnership.
Yadigar Belbuken, FOX Networks Group Turkey - VP, Thematic Channels & Content Distribution, said: “We’re delighted with the successful launch of the show and the buzz it’s been generating internationally at such an early stage. There seems to be an increase in demand for lighthearted content with humorous plot lines. We hope Mr. Wrong will resonate with viewers around the world. And to that end, we’re excited about our collaboration with Global Agency and hope to announce new titles in the coming months.”
About “Mr.Wrong”:
Despite her quest for Mr. Right, Ezgi keeps on falling for the wrong man. A surprise party for her boyfriend is struck by disaster when she sees him in the arms of a secret lover. As she struggles with the trauma, her friends warn her off the philanderers who always betray her.
Ozgur too appears to be Mr. Wrong. The handsome and wealthy bachelor is always the center of
attention for women vying to be his lover. While he charges from fling to fling, miserable Ezgi’s life
unravels and she loses her job and gets kicked out of her apartment.
Despite their differences, Ozgur and Ezgi both have mothers worried about their future and they
conspire to bring them together. When they meet in Ozgur’s bar, Ezgi is devastated to see Soner
proposing to a woman. She pours her heart out to Ozgur and they end up spending the night together.
As their friendship blossoms, Ozgur helps Ezgi seek to win another man’s heart. In turn he asks her to
pretend to be his girlfriend to please his nagging mother. But their game is destined to bring Ezgi closer
to Ozgur - Mr. Wrong – awakening hopes of the happy ending she always desired.