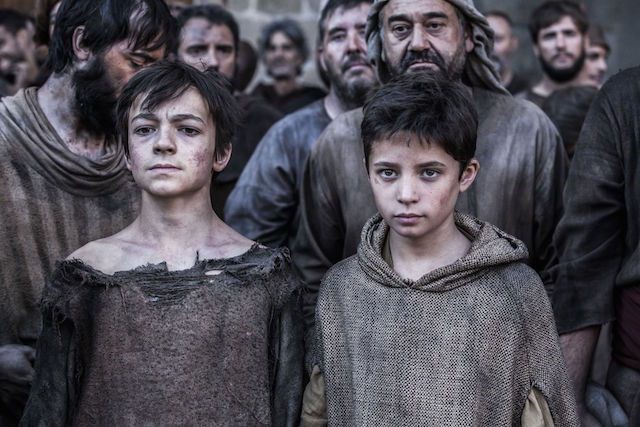 Canale 5 premiered on May 19, the Spanish hystorical drama series La Cattedrale del Mare (eng. The Cathedral of the Sea) based on the homonym novel of Ildefonso Falçones. Co-produced by Atresmedia and Netflix with Diagonal TV, the series is available on streaming platform Netflix since 2018 and on Antena 3 (Spain).

Technical cast consisting of 2.500 extras, 2.000 costumes and 220 animals. 80% of the shots were taken outdoors, in Estremadura, Castilla La Mancha, Castilla y León, Madrid, Aragon and Catalonia, as well as in Barcelona. The Basilica was specially built to carry out the sequences that represent its construction.

In Spain, the series achieved a good ratings: broadcasted from May to July 2018, it debuted with over 3.8 million viewers, and then settled on an average of 2.6 million people (17.3% share). In Italy the series premiered with 2.642 million viewers and 11.2% of share.

SYNOPSIS: The city of Barcelona is in its moment of greatest prosperity: it has grown to the Ribera, the Fishermen's Quarter, where its inhabitants decide to build with the money of some and the effort of others the largest Marian temple ever known: Santa María de la Mar. This construction is parallel to the story of Arnau, a child who is saved from the abuses of his feudal lord by his farming father Bernat and together they take refuge in the county capital, where they become citizens and, with it, a free men. Bernat raises his son as best he can, working as a pottery maker and horse groom, eventually adopting a second son. Famine and uprising brings his death, leaving the young Arnau to raise himself as a stevedore and eventually finding fame and fortune as a money changer. A strenuous life, always under the protection of the Cathedral of the Sea, that was going to take from the father's the misery of a fugitive to the son's rise in nobility and wealth. But with this privileged position he also gets envy from his peers, who plot a sordid plot that puts his life in the hands of the Inquisition.