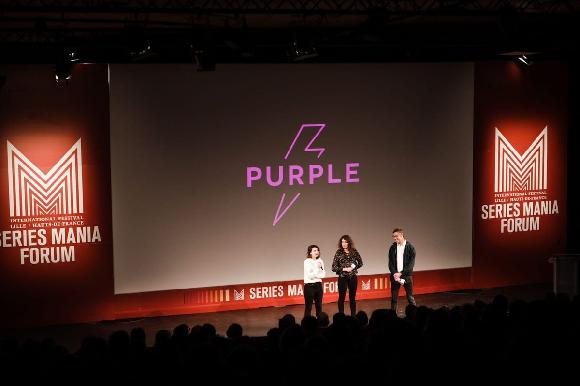 Along with Lyvers, the jury included Nathalie Biancolli, Director of Acquisitions & International Fiction, France Télévisions; Anne Croneman, Head of Programme Film & TV Drama, SVT; Caroline Torrance, Head of Scripted, Banijay Rights; and Christian Vesper, EVP & Creative Director for Global Drama, Fremantle. Together they had the honor of presenting a check for €50,000 to Harold Valentin, Aurélien Larger, and Simon Trouilloud from Mother Production, who are teaming with Judith Nora and Priscilla Bertin of Silex Films and writer-creators Judith Havas and Noémie de Lapparent to produce Purple, a drama set at a ‘90s Paris lesbian nightclub.

<em>“While all of the pitches were of very high quality this year, we were impressed with ‘Purple’s’ key themes of empowerment and optimism. The characters felt dynamic and original, while the story emphasized opportunity and positivity. We believe there is much more of this unique story to be told and it is our hope the €50,000 prize will help the creative team move forward with this ever-relevant series and engage audiences in a larger cultural conversation”</em> commented Lyvers.

<em>“Now in its 7th year, the Forum has become known as the ‘springboard for the series of tomorrow’ and is the place in Europe to connect the creative international community with TV series executives. This year we received 399 projects from 41 countries and were extremely impressed with the quality of projects from around the world,”</em> commented Ms. Herszberg. <em>“We all know how difficult it is to finance the beginning of a project and this is why SERIES MANIA created this €50,000 prize to help the creators finance and develop their ideas.”</em>