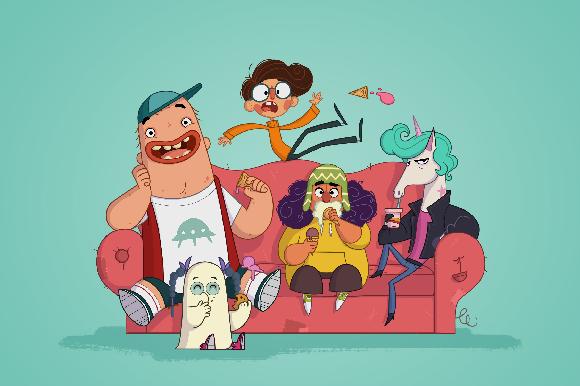 DHX Media (or the “Company”) (TSX: DHX, NASDAQ: DHXM), a global children’s content and brands company, is bringing the weird and wild world of Dorg Van Dango to Nickelodeon International, having signed a new exclusive agreement with the global kids’ broadcaster. Dorg Van Dango is a Canada-Ireland co-production from DHX Media and Cartoon Saloon, in association with Family Channel in Canada and RTE in Ireland.

The world of Dorg Van Dango is really hilarious and quirky,” said Josh Scherba, President, DHX Media. “What kid wouldn’t want a super-cool unicorn, a curious alien, an ancient witch and an eerie ghost as his secret, new best friends? When these escapees from Area 51 look to ‘normal kid’ Dorg Van Dango for help, things get crazy. Alongside the team at Cartoon Saloon, we’ve created something really fun and special here, and we’re confident Nickelodeon’s international audience is going to love following the adventures of Dorg and his unusual new friends.”

“We are thrilled to be partnering with DHX and Cartoon Saloon on Dorg Van Dango. The vibrant, fun, fresh look of the series and unique stories of friendship, are a perfect fit for Nickelodeon and we look forward to introducing Dorg and the Magicals to our audience internationally,” said Layla Lewis, SVP Global Acquisitions and Partnerships, Nickelodeon.
“I want to thank the very clever people at Nickelodeon for joining Cartoon Saloon and our wonderful colleagues at DHX Media on this journey to bring Dorg and his friends to an international audience,” said Paul Young, CEO of Cartoon Saloon. “Our Emmy-winning comedy writer, Nick Murphy, has been leading a team of Irish and Canadian writers to create scripts that have left me crying laughing. Our creative team of Fabian Erlinghauser, from Cartoon Saloon, and Matt Ferguson, from DHX Media, are preparing a show that has a very colourful, original look. Something fresh for a new generation of kids out there. We’re all very excited!”

A brand new animated comedy for six to 11-year-olds, Dorg Van Dango (52 x 11’) follows the adventures of Dorg, a normal kid, living in the very normal town of Normill. That is, until he meets THE MAGICALS: Jet Lazor, the super-cool unicorn; Patronella, an ancient witch; RD, a curious alien; and Yooki, an eerie ghost. They are all escapees from Area 51 and are in desperate need of help and refuge. To have them blend in with the citizens of Normill, Dorg disguises them as teenagers and hides them in the basement in the local shopping mall. With his new best friends attempting to help navigate life’s challenges, Dorg’s world just got a whole lot less normal and a lot more fun!

Production on the series is underway at DHX Media’s Vancouver studio. Dorg Van Dango is expected to roll out internationally in 2020.

Dorg Van Dango is based on an original idea by Fabian Erlinghäuser (Song of the Sea, Moone Boy) and Nora Twomey (The Breadwinner, The Secret of Kells) and is developed and produced with assistance from Fís Éirean/Screen Ireland and Creative Europe. Cartoon Saloon handles writing, designs, storyboards and post-production as well as distribution in Ireland and the UK, and DHX Media handles voice records, character and background builds, animation, and distribution rest-of-world.